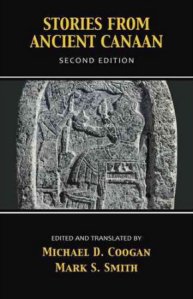 How do we know what the Canaanites believed? How did their beliefs influence the Israelites? Tablets discovered in the ancient city of Ugarit help answer those questions.

The book Stories from Ancient Canaan is a review and translation of those stories by Michael Coogan and Mark Smith. A second revised edition with updated translations and new discoveries was produced in 2012.

This post is the second in the series, looking at the stories of Aqhat, and Rephaim. The first post gave a general introduction to the book as a whole.

Aqhat
This myth tells of the desire for King Danel (who may be mentioned in Ezekiel 14:14 and 20 and 28:3; see the footnote) to have a son and heir, despite having a daughter Pugat. Casual misogyny unfortunately being part of the culture… Danel’s request is granted by the gods Baal and El (the chief god), after 7 days of sacrifices. The list of duties of a son is repeated several times and includes caring for his father whilst alive and after his death, not least “to hold his hand when drunk”!

Aqhat is born and is strong, brave, and handsome. Paralleling other myths, Aqhat attracts the attention of the goddess Anat, who wants to take him as her lover. Aqhat resists her advances, as all her previous lovers have died. Upset, Anat has Aqhat killed… Aqhat’s death is described like this (which shows another version of parallelism):

This also uses similar language to that of the Old Testament, for example Job 27:3:

as long as I have life within me,
the breath of God in my nostrils

As part of Danel’s mourning he curses the town’s nearest to where Aqhat was killed (!) and asks for a seven year drought (which is granted by Baal). In revenge, Danel’s daughter, Pugat, then kills her brother’s killer. Unfortunately the end of the story is lost.

Rephaim
This myth is about the royal dead, worshipped as gods with feasts held in their honour. This tablet probably mentions the late summer harvest (Biblical Sukkoth) The word is used in Job 26:5 and also in Isaiah 14:9:

The same word is also used to refer to King Og, a giant and last of the Rephaim in Deuteronomy 3:11, and on a list in Genesis 15:18-21 of the inhabitants of the land of Canaan. So, what exactly the connection between the royal dead and the living Rephaim is isn’t entirely clear.