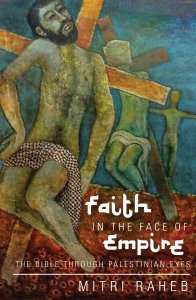 What does the Good News look like for Palestinians? What does the Bible have to say about the severe problems that Palestine faces? Mitri Raheb is a Palestinian Christian and has written the book Faith in the Face of Empire to answer these questions.

It is a challenging theological and historical reflection on the geo-politics of the Palestinian-Israel conflict. Raheb starts his examination by deliberately examining the history and geo-politics rather than the theology. This approach, he argues, provides more helpful insights as its sets the theology in its context. This is a helpful reminder that our theology needs to be shaped by our context so that it is relevant, and that the Bible is shaped by its context, which we need to understand in order to properly apply it to ours. It also provides a useful introduction to some of the significant issues in the region.

Raheb discusses and adopts the methodology of the longue duree (seeing history as processes unfolding over a very long time-scale, not a series of short-term events), and a postcolonial approach to challenge the perspective of Empire. Empire being the dominant culture which sets the agenda and context for debate and discussion (including theological). Again, this is a helpful and challenging perspective. Raheb argues that Israel is essentially a proxy Empire, supported as it is by the West, particularly the USA. Consequently, he critiques theological approaches, especially those of American conservative evangelicals, which support the domination of Israel.

Minimalism
Unfortunately, one of the ways Raheb seeks to do this is by adopting the approach of the biblical minimalists Whitelam and Davies. These authors argue that the history of Israel as given in the Old Testament is a later construct dating from the time of the Persian Empire.

was the ability to spot God where no one else was able to see him.

However, Raheb only starts this with the Exile, and not with the Exodus. A similar approach was more explicitly taken by Naim Ateek in Justice and Only Justice. Ateek argued that the theological understanding of the exodus could not be helpfully applied to the situation in Palestine, as Israel had appropriated the Exodus in such a way as to make it impossible for the Palestinians to use it. In Raheb’s helpful terminology, this is the Empire exerting control through the adoption of an Imperial theology.

However, Raheb’s approach is almost certainly also influenced by his adoption of the minimalist’s approach, which denies that the exodus happened.However, this is both unconvincing archaeologically and unhelpful theologically. Although many archaeologists (but not all; see, for example, Israel in Egypt by James Hoffmeier) are skeptical that the exodus happened exactly as the Bible depicts, there is a also a widespread critique of the types of approaches taken by the minimalists. So, for example, Bill Dever, whilst not accepting the biblical account of the exodus thinks there may be room for a small but influential group to have escaped from Egypt as part of the mix of people which settled the Iron Age hills after the collapse of the Late Bronze Age empires. See also my blog posts on Archaeology and the United Monarchy or the site of Kunjit Arjud for a more mainstream perspective.

Theologically, the exodus is the primary revelation of God, which structures subsequent revelations (including the ones that Raheb refers to). So, for example, Wright in The Mission of God shows that the Exodus is the base event which reveals God’s mission, and which is taken up by the rest of the Old Testament and ultimately by Jesus in his death and resurrection. It is also a key part of most liberation theologies.

Theological reflections
Despite this, Raheb’s theological reflections on God, Jesus and Spirit are interesting and mostly helpful, challenging and contextualising theological interpretations. He speaks of Judaism and Christianity arising out of the shadow of Empire, as a theological reflection of where God is for the powerless. For example, his discussion of ‘the meek shall inherit the land’ in the perspective of the longue duree offers a alternative reading of the text.

Interestingly (p70f), Raheb criticises the theological approach to the Old Testament based on the triangle of God, land, and people from a post-colonial perspective. He argues that (p70):

This closely resembles a religious nationalism discourse. A glance at Palestine and its history reveals that there is often more than one “people” inhabiting the land and multiple identities coexisting side by side developing adversarial identities.

He seeks to contrast this with the diversity encouraged in the New Testament. Unfortunately, Raheb seems to be unaware of the excellent discussion of the triangle by C J Wright in his book Old Testament Ethics for the People of God. In this Wright shows that the Old Testament view is based on this triangle, but also shows how this is complex, critiqued by the text itself and does not collapse into uniformity (p251):

The glory of the future reign of God will be the influx of the rich variety of all peoples. This is the throbbing joy of Isaiah 60, and the more sober warnings of Zechariah 14:16ff. Furthermore, not just the peoples, but all their achievement, wealth and glory will be brought, purified, into the new Jerusalem of God’s reign.

Raheb ends his book with a discussion of ways of creative resistance that could be taken. He bases his practical conclusions on the Kairos Palestine document, which criticises Israel for being an apartheid-style state (where there is systematic discrimination against one section of society, in this case non-Jewish Israelis) and calls for Boycott Disinvestment and Sanctions (not against Israel but against the illegal West Bank settlements). These are both controversial. I know, for example, some Christian leaders from the region who believe that these actions may exacerbate the situation rather than help to bring about a just peace. Nonetheless they are supported by many Palestinian Christians and many people from around the world who are concerned about the situation in Israel-Palestine. It is probably up to those Christians who agree with the diagnosis but disagree with the treatment to come up with alternative proposals for practical action.

Summary
In short, Raheb’s book offers a challenging critique of many assumptions (geo-political and theological) that are still too prevalent in the West and suggests some positive alternatives both theological and practical. However, these are let down by a somewhat superficial theological discussion of the Old Testament and a reliance on a discredited, minority reading of Old Testament history, all of which means that this book is less compelling than it should otherwise be. Nonetheless, it includes important challenges, both practical and theological that need to be heard and acted upon.

3 thoughts on “Review of Faith in the Face of Empire”