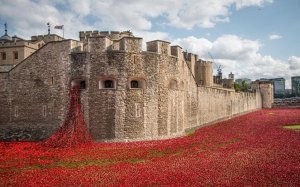 This was my sermon for a civic service on Remembrance Sunday, which we hold jointly with the Baptists. It’s a good chance to gather together as churches, with the local MP, councillors, the ATC and many others for something of shared importance. But, the challenge is then what are we doing?

What is your image of the War? What do you think of when we have the two minute’s silence? What exactly are we remembering as we fall silent on Armistice Day and Remembrance Sunday? And, what difference should that remembrance make, if any, to our lives?

Perhaps the image for this year’s remembrance is the poppies at the Tower of London. There are 888,246 ceramic poppies, one for each British and Colonial soldier who died during military action in the First World War.

This art-work is called Blood Swept Lands and Seas of Red and was created by the Derby-based artist Paul Cummins. All the ceramic poppies were hand-made in Derby, using techniques that would have been used by potters here in Swad and elsewhere during the First World War. The name Blood Swept Lands and Seas of Red was taken from the description of a Derbyshire soldier who described the death and destruction he saw in the battle at Flanders, before he himself perished.

About 4 million people have seen the poppies, about £15 million has been raised by their sale, and parts of the installation will be touring Britain before going on permanent display at the Imperial War Museum. The stage designer Tom Piper who designed the work along with Cummins thinks that this is because each one of the 888,246 poppies represented a single life. People can see the number of poppies that are there and be struck by the scale of what they see.

Each one of those 888,246 poppies represents a life. A life destroyed, cut-off, finished. But, the question has been raised, is that enough? Does it help us to really face up to the enormity of what happened? Perhaps it brings it home to us in a way that even photographs of the dead, or photographs of the widespread destruction don’t.

But, the 888,246 poppies in Blood Swept Lands and Seas of Red only represent a small fraction of the lives snuffed out by the Great War, the War to end all Wars. It’s estimated that there were a total of 16.5 million deaths during the First World War; almost 10 million combatants and close to 7 million civilians. A further 20 million or so combatants were wounded. If a poppy was made for each one, then the sea of red would flow out of the Tower of London moat, along the bank of the Thames, up the Mall and end some 3 miles away by Buckingham Palace.

What do we remember when we fall silent? What difference should that make to our lives?

We heard in the reading from John’s Gospel that well-known verse that is often used at Remembrance Day services: “Greater love has no man than this, that a man lay down his life for his friends”. We often think of this verse in the context of those who have died in war, and it is very relevant. But Jesus was referring particularly to his own laying down of his life.

Because, this is part of Jesus’ final teaching to his disciples before he is killed on the cross. Jesus is encouraging his disciples, to maintain the relationship that they have built up, even after his death. Jesus shows us the depth of this love, the importance of this relationship, by dying for us. And we are given hope that this means something by Jesus rising to new life, to show us the way to God, to empower us with the Holy Spirit, and to demonstrate the importance of love, of relationship, of peace and reconciliation.

In the same way, relationships are meant to be at the heart of our Christian life. Our relationship with God, and our relationships with each other. Jesus spends quite some time telling his disciples to love him and to love one another, which means he knew it wasn’t going to be easy!

And to help us picture this there is another art-work in London about war and the end of war. It is in the British Museum and is a 10 foot rust-coloured metal tree, complete with metal leaves and metal birds perching in the branches. As you get closer to this metal tree you can see that the metal that the tree is made out of is rusting weapons. It is called the Tree of Life and was created with dismantled machine pistols, AK-47s and grenade launchers from Mozambique.

The Tree of Life is part of a wider project set up by the Anglican Bishop of Libombos in Mozambique, Bishop Dom Dinis Sengulane, called Transforming Arms into Tools. Bishop Dom had attended a conference on how peace and reconciliation could be brought to the war-ravaged country of Mozambique. Speakers had discussed the millions of weapons still hidden illegally after 16 years of civil war, which they said were the biggest threat to peace. These weapons needed to be destroyed but no one knew exactly how. Bishop Dom spent a sleepless night worrying about this before inspiration struck.

He was inspired by the passage from the prophet Isaiah that we heard, which talks about turning ‘swords into ploughshares and spears into pruning hooks’. So, Bishop Dom began the project Transforming Arms into Tools, which has seen over 600,000 weapons handed in, decommissioned and destroyed by workers who include former child soldiers, and exchanged for tools, for building materials, for tractors and bicycles, for ploughs and sewing machines.

The project is run by the ecumenical Christian Council of Mozambique and is supported by Christian Aid. To depict this vision, some of the decommissioned weapons have been transformed by local artists into sculptures, including the Tree of Life. Bishop Dom says of this project that “It is disarmament with a Biblical heart. We are transforming the guns into something positive. We are using a passage of scripture to transform the gun – and the mind of the person handing it over – into a peacemaker.”

So, as we gather here to remember and mourn those who have died in war defending our country, we need to do so in the knowledge that all war, no matter how just, falls short of God’s purpose and plans for our world and his kingdom here on earth. Archbishop William Temple wrote to a friend in November 1939 saying both that he was wholly committed to the decision to go to war but also that “We recognise that this is all to do with the sin in which we’re all implicated so that the best thing we can do is still a bad thing”. Why? Because he argued that “War in itself never produces a positive good, though it can restrain worse evils”.

Both the readings remind us that remembering in itself is not enough. It is not enough to pause for 2 minutes once or twice a year and remember. The challenge of Isaiah’s prophesy is that this is something that God calls us, like Bishop Dom, to do here on earth. Here on earth, is where we are encouraged to walk in the paths of God, to work towards the peace that only God can bring. And the promise of Jesus is that he gives us the power to do it.

Love each other, Jesus tells us. Greater love has no-one than this, that they lay down their life for their friends. There are many ways that we can lay down our lives, lay down our selfish desires and instead work for the common good, instead seek peace. Love each other, says Jesus as he goes to his death, as I have loved you.

Jesus, the Prince of Peace, leaves us his peace. He gives us the Holy Spirit to help us, to be peacemakers, to live in a different way. It is a way that requires strength and courage, as well as grace and love. It is a way that has been won for us by the deaths and courage of those who died and we seek to remember.

We will remember them. We will have truly remembered when “Nation will not take up sword against nation, nor will they train for war any more.” In the hope of that promise: “Come …, let us walk in the light of the Lord.” Amen.